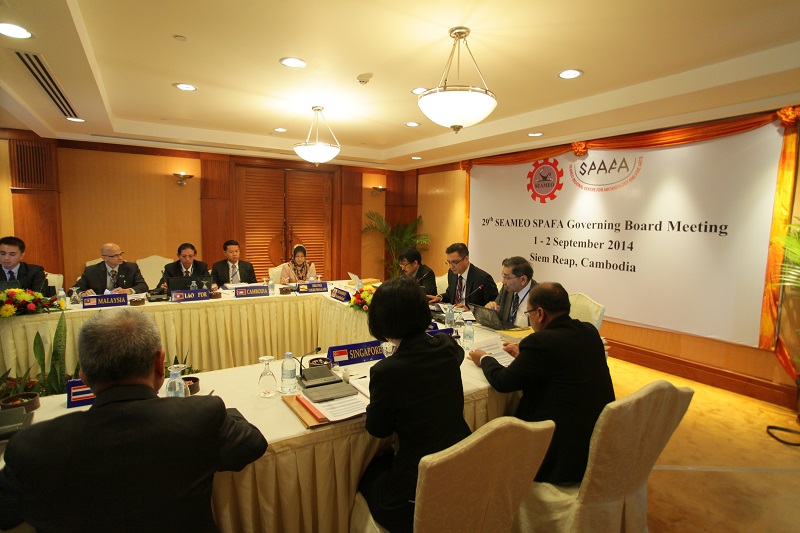 On 1-2 September 2014, SEAMEO SPAFA held its “29th Governing Board Meeting” at the Sokha Angkor Resort in Siem Reap, Cambodia, which was attended by SEAMEO SPAFA’s Centre Director, a representative from the Southeast Asian Ministers of Education Secretariat, and the Board of SEAMEO SPAFA who consist of Ministry of Education appointed officials related to the fields of archaeology and fine arts from each of the Southeast Asian member countries, except for Indonesia and Timor-Leste.
The meeting discussed the Centre’s accomplishments and operations in the past 2013-2014 fiscal year (July 2013 to June 2014) in regards to the status of the Centre’s programme activities and their associated budgets. The meeting also endorsed the Centre’s proposed programmes, projects and initatives for fiscal year 2014-2015 (July 2014 to June 2015) such as the Southeast Asian Collaborative Programme on Underwater Archaeology comprising underwater archaeology training, a database of Southeast Asian shipwrecks, and a consultative meeting on the 12-13 October 2014; a workshop on ‘Buddhist Arts in Southeast Asia’ on 12-15 November 2014; an international conference on ‘Southeast Asian Vernacular Architecture’ in March 2015; seminar and performances related to ‘The Spiritual Dimensions of Rice Culture in Southeast Asia’ in May 2015; and collaborative projects such as a board game showcasing paintings from Southeast Asia and Korea due in January 2015, and a proposed publication titled ‘Everyday Objects from Southeast Asia and Korea’ due in February 2015, just to name a few.
In his opening remarks, SEAMEO SPAFA’s Centre Director, Dr. M.R. Rujaya Abhakorn, said that the “29th SEAMEO SPAFA Governing Board Meeting” was a historic occasion because it was the first time that the Southeast Asian Ministers of Education Organisation (SEAMEO) Regional Centre for Archaeology and Fine Arts (SPAFA) was holding its meeting in Siem Reap, Cambodia, which was  an appropriate location as there were approximately 70 conservation projects locally involving 90 countries and it was therefore important for SEAMEO SPAFA and its Board members to be in Siem Reap to visit the sites and learn about the archaeological restoration and preservation activities being carried out in Angkor.
The SEAMEO Secretariat Deputy Director of Programme and Development, Prof. Dr. I. Handoko, added in his opening remarks that he acknowledged SEAMEO SPAFA’s role in the SEAMEO Secretariat initiative, SEAMEO College, through the Youth Leadership Forum where in which SEAMEO SPAFA is the lead centre.
On the evening of the first day of the GBM, SEAMEO SPAFA hosted a ‘Welcome Dinner’ by the magnificent poolside of Sokha Angor Resort, and in attendance alongside SEAMEO SPAFA’s governing board members were representatives from Japan’s Sophia Asia Centre for Research and Human Development, the Deputy Director-General and officials from APSARA Authority, and the Executive Director of the Center for Khmer Studies.
The second day of the GBM began with site visits, with the first bringing SEAMEO SPAFA’s Governing Board Members to Sophia Asia Center for Research and Human Development which is a centre of the Sophia University of Japan that works to develop human resources and conduct collaborative works relating to the World Heritage site of Angkor Wat and other cultural properties in Southeast Asia. This was then followed by a visit to the offices of APSARA (Authority for the Protection and Management of Angkor and the Region of Siem Reap), who is the Cambodian management authority responsible for the protection and management of the archaeological park of Angkor and its surrounding areas.
SEAMEO SPAFA’s 29th GBM was a memorable and fruitful event, and the Centre looks forward to its 30th GBM in the year 2015 with the possible venue of Luang Prabang in Lao PDR so as to coincide with the auspicious event of the 20th anniversary of Luang Prabang being listed as a UNESCO World Heritage Site. 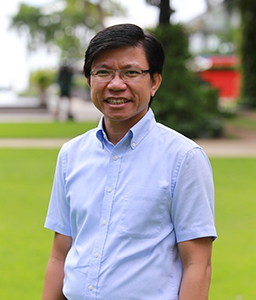