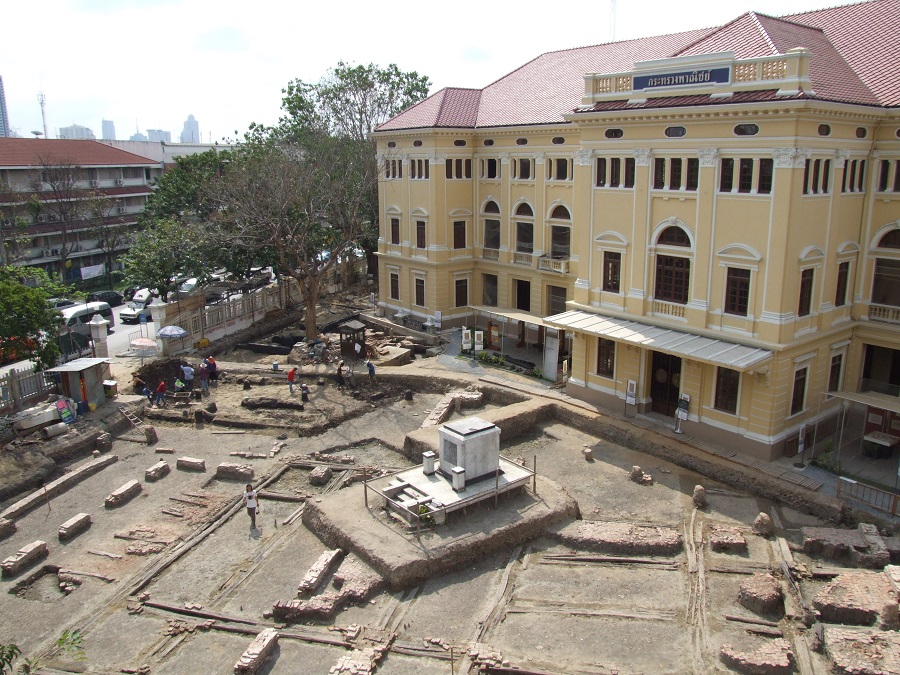 SEAMEO SPAFA in cooperation with The Siam Society Under Royal Patronage present Bangkok: Past and Present

The SEAMEO Regional Centre for Archaeology and Fine Arts (SEAMEO SPAFA) and the Siam Society will organize two lectures on the archaeology and urban conservation of Bangkok, as part of SEAMEO SPAFA’s lecture series on the archaeology of the Capitals of Southeast Asia. The fourth set of lectures, focusing on Bangkok, will be delivered on Wednesday 23rd May 2018 at 18.30-20.30 hrs. at the Siam Society. The event is free of charge.

Lecture 1 of 2: Archaeology in Bangkok

Bangkok was found in 1782 by the first monarch of the present Chakri dynasty. Nevertheless, historical records and archaeological evidences indicate the dynamic of settlement patterns through time from Ayutthaya period to present (ca. 800 years ago). Nowadays, Bangkok has been changed rapidly through the urban expansion and infrastructure developments. Archaeological studies in Bangkok have started systematically in the past 25 years. All of the archaeological excavations were considered as rescue/salvage archaeology or salvage of archaeological evidence before the archaeological sites were destroyed in order to develop, conserve, or improve knowledge regarding historic activities at these sites. There are more than 30 archaeological excavation sites, which are layered under dense infrastructure. Archaeological excavation project work closely with infrastructure development projects such as the mass rapid transit projects. Very tangible ruins and artefacts were revealed through a systematic excavation. The excavation of Siriraj Piyamaharajkarun Hospital is the best example of archaeology in Bangkok, which was conducted while digging to prepare the base construction of a new medical building in 2008. Many artefacts including the remains of wooden boat and ancient city wall were found. Therefore, an archaeological study was conducted in this area for this purpose.

Dr Kannika Suteerattanapirom is archaeologist and assistant professor of the faculty of archaeology, Silpakorn University in Bangkok, Thailand. Her ongoing research focuses on urban archaeology in Bangkok. She has undertaken numerous archaeological excavation projects in Bangkok. Her current research project entitled ‘state of knowledge of Bangkok archaeology: information, direction and plan of conservation and development in the future’.

“Rattanakosin Island” is the origin of Bangkok metropolitan area. Urban permanence falls under two criteria: tangible permanences, mostly old buildings inventoried as historic monuments, and intangible permanences, ancient urban features that remain in the city today in the form of activities and functions. The Chao Phraya River is the major structuring element of the city since its origin. The river and the three concentric boundary canals, dug successively, have limited and defined Rattanakosin Island, according to the traditional notions of Thai culture and in agreement with the former treaties on military art. The river and the three axes of urban expansion are the major permanence have guided the development of the city since the founding of Rattanakosin to the present metropolis. Today the construction of the road network has lessened the importance of water in the city and led to the disappearance of traditional urban features such as floating markets and clusters of houseboats, but the activity related to the river remains intense.