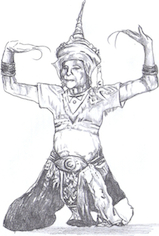 Southeast Asian culture is made more vibrant by its wealth of heritage in performance theatre and dance.  The various theatrical interpretations of the epic Ramayana, for instance, is deemed as the national heritage of some of the countries in the region, and it is enlivened by the infusion of local myths, craftsmanship, instrumentation, and dance movements.  While the Ramayana receives more attention from mainstream audience, folk and ritual dances that are no less important are pushed to the fringes, and exist in small communities where these traditions are threatened by social and economic pressures.

Southeast Asian performance theatre and dance, therefore, feature as priorities in SEAMEO SPAFA’s five-year programme so that less well-known performances, such as Mak Yong and Manora, can garner wider audience interest and support.  Focusing on these shared performance and dance traditions, the Centre wishes to underscore how dynamic the exchange of cultures has been among Southeast Asian communities through the centuries, and how inter-related they are.

To continue this tradition of exchange, current performers and artists need to share their expertise such that they can enhance their crafts and establish network among themselves for possible collaboration in the future.  Researchers also need to be encouraged to study further these performances and dances (such as their history, styles, interpretations, costumes, instrumentation, etc.), and disseminate the results thereof.

Performance theatre has long been woven into the culture of Southeast Asia, figuring prominently in both folk and court traditions in various forms and styles.  Southeast Asian performance theatre – its myths, music, costumes, songs, musical instruments, and movement – is a confluence of indigenous and animistic belief systems, and Indian and Chinese cultures.  It has found its place in court traditions, reaching grand scale, elegance, and refinement.  More than just for entertainment, many Southeast Asian performances are spiritual rites themselves such that they have a very close association with folk healing rituals or acts of paying respect to spirits.

Performance theatre in Southeast Asia is a regional heritage in its dynamic interchange of oral literature, musical instruments, costume details, styles of movement, and spiritual beliefs.  Where they find ground, they are adapted to local traditions, with local artistry, craftsmanship, and acting and dance styles molding the localization process.

The following are some of the theatre and dance performances that have crossed borders among Southeast Asia’s societies.  Some of these performances have found a following in pockets of communities; and others are regarded as national heritage by several countries in the region.

Makyong and Manora deserve rightful recognition for their significant contribution to regional heritage, in addition to them forming part of the spiritual lives of the people.  It is unfortunate these theatrical art forms and spiritual practices are rapidly declining.  For one, many of them are transmitted orally and require long years of training, thus a shortage of seasoned performers and artists.  Also, social and economic pressures have pushed them beyond mainstream consciousness, further eroding the appreciation for its artistic and cultural value.  The lack of support from the private and public sectors in preserving such heritage for future generations does not help either.  SEAMEO SPAFA realizes the importance of Makyong and Manora, and through a series of seminars and performances, the Centre attempts to cultivate awareness of the wider public of some of Southeast Asia’s shared heritage.

In summary, this series on performance theatre will facilitate the exchange of knowledge, techniques, and skills among scholars and practitioners of a specific performance or dance as well as to extend the dialogue and sharing of expertise to other performance artists and researchers all over Southeast Asia.

Publication of seminar papers and discussions; setting up of a website for professional networking.