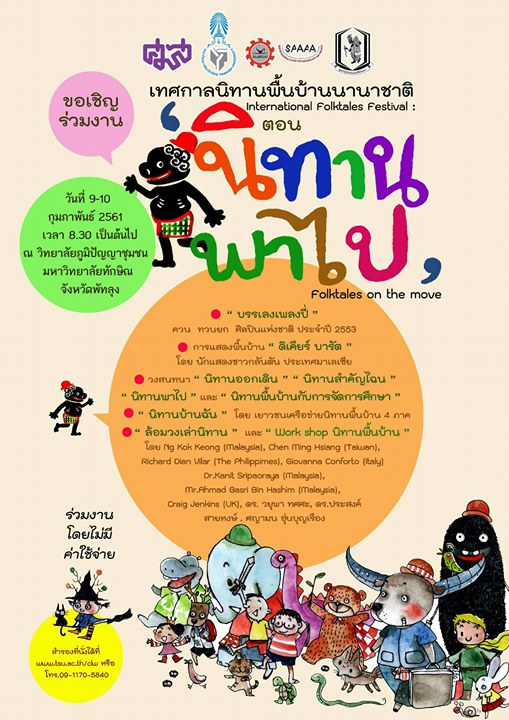 This educational outreach initiative aims to bring storytellers from Southeast Asia and beyond to schools and communities in Phattalung, southern Thailand within the framework of the 6th International Storytelling Festival, to perform traditional folktales to audiences and conduct workshops with teachers and parents on the art of storytelling. This project aims to help preserve this traditional form of entertainment by replicating its traditional mode of oral transmission from the older to the younger generation. The participation of experienced storytellers from various countries will also help to foster appreciation for diverse and shared values embodied in this form of intangible cultural heritage.

The 2003 Convention for the Safeguarding of Intangible Cultural Heritage represents an important milestone in the recognition of non-Western manifestations and practices of cultural heritage, in a field which had until then privileged Western notions of cultural heritage often associated with monumental sites. While the Convention was a considerable achievement in acknowledging the value of cultural diversity and human creativity and the importance of safeguarding intangible cultural heritage, for some, the Convention came too late, resulting in some forms being completely extinct. In response to this, the Centre has been expanding its efforts in the promotion and preservation of intangible cultural heritage in the Southeast Asian region, with its most recent endeavours being the seminar and performances on the “Spiritual Dimensions of Rice Culture in Southeast Asia” (2015), “Panji/Inao Traditions in Southeast Asia” (2013) and “Mak Yong Spiritual Dance Heritage” (2011). Furthermore, SEAMEO SPAFA has been continuously supporting the teaching and transmission of folktales, working with various collaborators across the Asia-Pacific region and beyond in the production of educational materials, as well as a collaborator in the organization of the 1st, 2nd, 3rd, 4th and 5th International Storytelling Festivals in Thailand (2013-2017) and the Hue Storytelling Festival in Vietnam (2017).

With the development of digital technologies and forms of entertainment, various traditional performing arts, such as storytelling, are at risk of disappearing. While tales can be documented and preserved in writing, tales are traditionally transmitted orally from one generation to the next within the family or community, or from charismatic performers to the audience. As a result, the collective memory of tales, which are traditionally a means to transmit moral values, history, explanations to natural and supernatural phenomena, by way of entertainment provoking both thought and emotion, is losing its traditional method of oral transmission, thereby putting at risk an important manifestation of this heritage that documentation alone cannot save. One way to ensure the oral transmission of folktales is to provide a regular platform for storytellers, teachers, parents and children to come together, providing an opportunity for the continuity of collective memory.

Furthermore, following submissions and inscriptions to the UNESCO List of Intangible Cultural Heritage of Humanity, transnational issues have arisen from different countries claiming ownership of forms of intangible cultural heritage that are in fact shared manifestations, beliefs and practices. It is therefore the Centre’s responsibility as an educational organization with a mandate to raise appreciation for shared and diverse cultures in the region to promote shared heritage as a unifying rather than conflicting element in intercultural perceptions and relations.