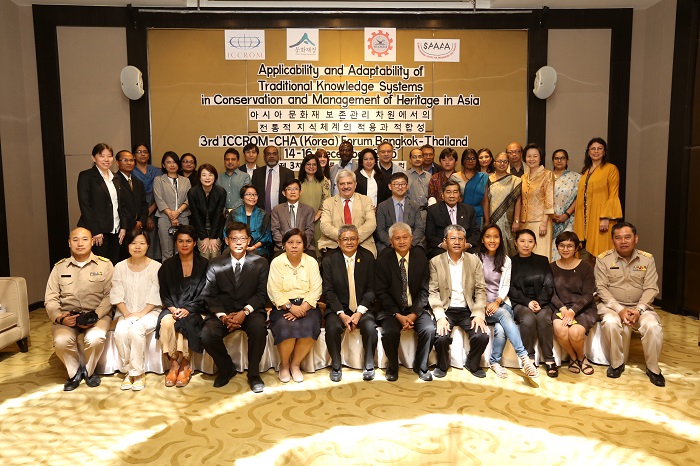 It is often argued that the currently designated heritage sites have been sustained, managed and passed down to us thanks to associated traditional knowledge systems. Indeed, the Asian region is extremely rich in such knowledge, which in some cases, is well recorded, time-tested and still in practice in many countries. However, with the introduction of modern conservation approaches, less and less attention has been paid to it. In the very recent past, however, the importance of the traditional knowledge systems has been being recognised, studied and applied for the benefits of long-term conservation and management of both cultural and natural heritage. Still, many heritage sites are managed through customary law through various elements of existing social structures. The resources required for the continuity of heritage, in the form of labour, are shared by members of the social structure who also bring their knowledge (principles influenced by traditional beliefs), skills and techniques tested by time, and the materials needed. Traditional societies have regular schemes in planning their work, setting targets and achieving results through their own systems of implementation of activities using their own resources.

In the natural heritage sector for instance, it is firmly established that to achieve conservation and sustainable use of ecosystems, ‘traditional’ and ‘formal’ knowledge systems need to be linked. This indeed is valid for cultural heritage as well. It is encouraging to note that the World Heritage System has already recognised traditional practices as ingredients for effective protection and management of properties in the World Heritage List.

Exploration of traditional knowledge systems and their applicability and adaptability is also directly linked to the communities and other audiences such as custodians of temples and lands which are part of the heritage. Therefore, it is time that we take a stock of such knowledge systems and explore their applicability and adaptability into our modern practices of conservation and management of heritage.

A forum on a different theme for five years has been organized by ICCROM with the collaboration and financial support of the Cultural Heritage Administration (CHA) of Korea. Each Forum will be an opportunity to explore, research and discuss one key theme and related issues, focusing on current debates taking place in the Asian region but comparing and contrasting similar issues elsewhere when appropriate. ICCROM and CHA choose an Asian country to be the appropriate host country according to the forum’s theme that year.

To date, two activities have been implemented as follows:
2013: Forum on Asian Buddhist Heritage: Conserving the Sacred in Seoul
2014: Forum on Authenticity in Asian context in Sri lanka

Based on previous discussions ICCROM would like to propose the following theme for 2015: Forum on Applicability and Adaptability of Traditional Knowledge Systems in Conservation and Management of Heritage in Asia. The theme meets SEAMEO SPAFA’s 5-year plan in general, particularly in regards to Disaster Risk Management for Southeast Asian Cultural Heritage in the aim of harnessing traditional knowledge and local wisdom for disaster risk mitigation measures.

Participants will be asked to submit written papers (3000-5000 words) suitable for publication on subject areas agreed with the organizers and need to address the key issues outlined by the organizers. At the symposium, they will be required to make a 20-minute presentation.

Record and explore the applicability and adaptability of Asian traditional knowledge systems in conservation and management of heritage and linking them to current practices.

A thematic publication of the papers presented at the Forum mostly based on case studies including the conclusions.