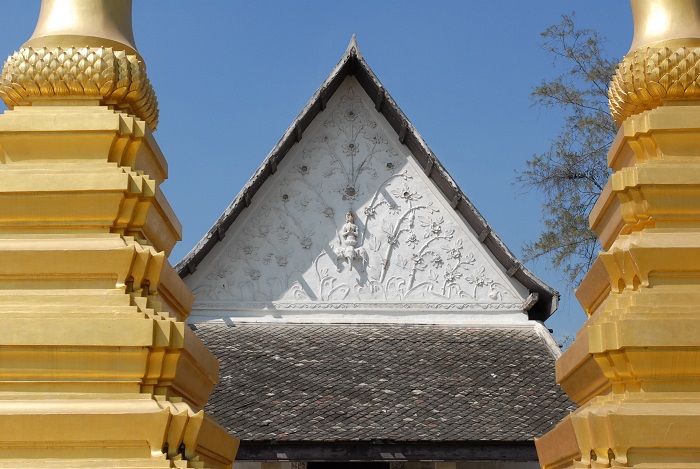 Wat Pa Klang Thung, which literally means “Forest Monastery in the Middle of the Field”, is a Theravada Buddhist monastery on the west bank of the Chao Phraya River in what is now Pathum Thani province (50 kilometres from Bangkok, Thailand).  It is located in what was a community of Mon refugees from lower Burma, and situated between the old Capital of Ayutthaya and the present Bangkok metropolis.

The Ordination Hall (Ubosot) of Wat Pa Klang Thung is a good example of Ayutthayan wall-bearing architecture still standing with rare stucco decorations outside, and mural paintings on the inner walls.  The construction of a new and bigger Ordination Hall, along with the recent urbanization in the area, resulted in the neglect of the old Ordination Hall which became a storage room for valuable Buddha images, and attracted termites and birds.

Wat Pa Klang Thung was flooded for nearly 4 months, from September to December 2011.  The flood waters came from the rivers as well as the ground and other flows, which exacerbated painting blisters, flaking, and scaling; and the lime plaster to disintegrate because of soluble salt in the floodwater and the soil.

As it was one of the many temples around Bangkok that suffered from the great flood of 2011-2012, SEAMEO SPAFA’s request for a disaster relief action project for this building was accepted by the Prince Claus Fund of the Netherlands under their Cultural Emergency Response (CER) programme. If properly restored, there would be an incentive to make use of the temple’s old Ordination Hall, and it would become a place of communal pride.

The proposed intervention had 4 components:

1. The Technical Component was to be carried out by conservationists and mural painting experts.

2. The Research and Academic Component was to be made in collaboration with Silpakorn University.

3. The Documentation Component was to be undertaken by photographers and multimedia experts from Chiang Mai University and Mahidol University.

4. The Community Network Component was to be done in co-operation with Mon community leaders, Wat Pa Klang Thung, and the local government.