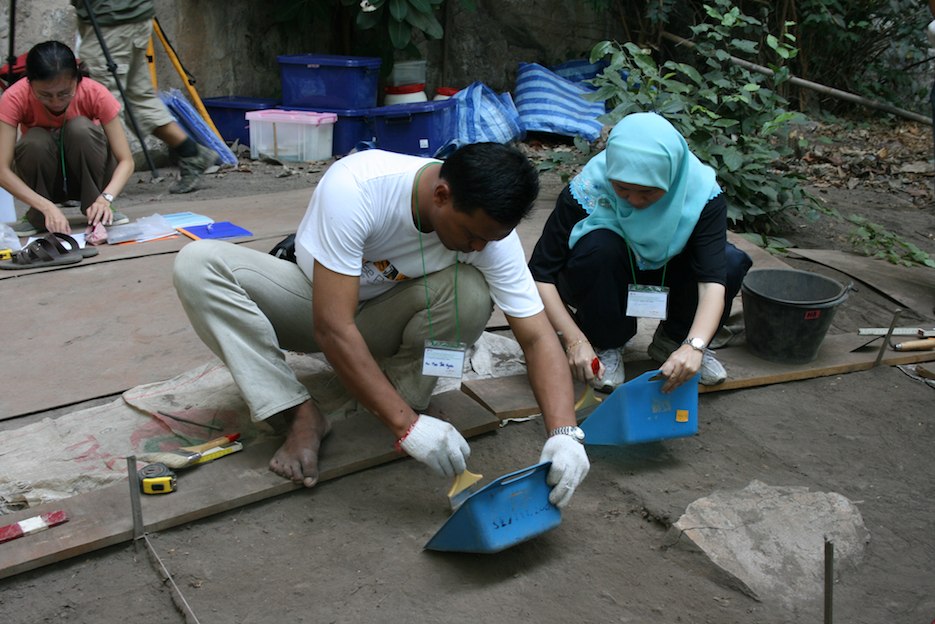 Subsequent to the SPAFA Training/Workshop on the Introduction to Rock Art Studies in Southeast Asia organized on 2-13 May 2011, the course participants expressed great interest in obtaining more fieldwork practice, especially rock art site interpretation and conservation.  Also, they would like to encourage the local communities to participate in archaeological fieldwork as it will be able to raise conservation awareness among the local people.

The Rock Art Training/Workshop in 2012 was designed to meet the needs mentioned above.  Participants from SEAMEO member countries consisted of archaeologists and related fields.  They engaged in archaeological excavation, a test pit, at a rock art site.

The participants applied their analytical skills to interpret the functions of the site used in the past as well as the present, including comprehensive knowledge on rock art paintings, artifacts found in the test pit, and the use of the surrounding areas by the local communities.

The local community, both adults and children, were invited to attend the archaeological fieldwork, and learn how to take part in an excavation, as well as assist the participants by guiding them around, and providing useful information.

There had only been two archaeological excavations conducted at rock art sites in Thailand, the first of which was conducted at Pratoo Pha Military Based Camp, Lampang Province, many years ago.  The second excavation was an on-going project between Thailand and France that started in 2010 at Doi Pha Kan, Lampang Province.  The aim of SEAMEO SPAFA’s Training on Rock Art Studies in Southeast Asia II was to increase comprehensive knowledge, and stimulate practitioners to engage in more research on rock art in Southeast Asia.

The programme was designed to focus on fieldwork, which involved rock art and site data collection, on-site conservation and community participation because of four (4) reasons below:

An excavation report will be made; it will contain not only archaeological data of the site, but also ethnological, botanical, geological, and other information.  This will increase archaeological knowledge of rock art in Thailand and Southeast Asia.